"Can they make trailblazing and homemaking fit, or is love just another gender stereotype?

Reece swapped a blue collar for a pink collar job.

She’s a single mum by design. He’s a nanny by choice.

She gets passed over for promotion. He struggles to find a job.

She takes a chance on him. He’s worth more than he knows.

There’s an imbalance of power. There’s an age difference.

There’s a child whose favourite word is no.

Everything about them being together is unsuitable.


Working in a male-dominated corporate environment, single mother Audrey already has her hands full trying to find a balance between work and home, so when her nanny, Cameron, resigns, she’s faced with the uncertainty of finding a suitable replacement. When, Reece, arrives for an interview, Audrey is shocked to realise that her final applicant is very much male – even if he does has the same first name as Rees Witherspoon although spelled differently!

To cut a long story short, Rees has all the qualifications as well as good references (his sisters) but Audrey finds herself in a dilemma due to the fact that he is a man. Unfortunately for her, three-year old Mia hits it off immediately with Rees. Going against everyone else’s advice (and because she feels a bit sorry for him), she decides to offer him the job, not realising that this gentle giant is going to change her life, in ways she never expected, forever. While she is strong and has chosen her own path in life, will her independence and stubborn pride allow her to forgive Reece for not being totally honest with her?

Although this is the first book I have read by Ainslie Paton, (sorry Ainslie, Detained and Hooked on a Feeling are still on my list), I have absolutely no doubt in my mind that they will be as good as this one.

Even though I’m a bit of a romance buff I haven’t failed to notice that most of this genre follows the same kind of conventions, although I do believe that Ainslie has broken the mould. Instead of giving us the traditional Hero and Heroine, Ainslie has decided to reverse their roles by giving us a high-flying female executive, who is a single mother by choice, and an all-out gorgeously buff male (think Channing Tatum) who really is a big softie at heart and just wants to work with kids.

There is no fluff in this novel. It is pure real-life and, although the romance is central, Ainslie skilfully weaves in themes of gender equality, older woman/younger man relationships, single motherhood, family dynamics and friendship.

She brings her characters to life by making them face real, everyday situations and fully deals with their very different back stories by offering us the narrative from both their perspectives. For me, this is a sign of great storytelling as it allowed me to get to know the characters intimately thereby enabling me to get a great feel for their emotions and hang-ups.

Her secondary characters of Mia (bless her little heart), Les, Polly and Reece’s mother and four sisters are just as well drawn which adds much depth to their story and allows her hero and heroine to become fabulously three-dimensional.

While the book is long and can slow down at times, it is not without substance and Ainslie keeps the tensions and emotional angst high enough to sustain her reader’s interest. I do believe that she writes straight from the heart and I look forward to reading more from her.

An entertaining story with great sizzle and some poignant moments, I wish to thank Ainslie for providing me with an ARC.

Ainslie Paton is a corporate storyteller working in marketing, public relations and advertising. 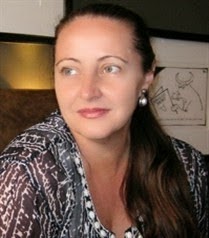 She’s written about everything from the African refugee crisis and Toxic Shock Syndrome, to high-speed data networks and hamburgers, and for everyone from George Clooney to Barry Humphries—as Edna.

She writes cracking, hyper-real romances about strong women and the exciting men who love them.