“When Maeve O’Brien’s boss sends her to a dreary old island to finalise some paperwork, she couldn’t be happier. It’s the big career boost she needs – and besides, life isn’t so great on the home front in Dublin.

Maeve’s reception on Hy Brasil, a remote island off the west coast of Ireland, couldn’t be any more hostile. It’s as if the place itself wants her gone.

But nothing’s going to scare Maeve off, even if she does miss her credit card and her one-night stands. She’s determined to track down Sean Fitzpatrick, whose signature on the paperwork is going to transform the island.

And yet, somehow, life begins to change. It might be miserable and treacherous on Hy Brasil but it’s also beautiful and strangely seductive. Maeve’s never felt better. And there’s also Killian, the dreamy islander with green eyes, who’s stirring up all kinds of feelings in Maeve.

But something’s brewing, and Maeve’s going to discover just how far people will go to protect the ones they love.”

In this, her second contribution to the literary world, Ellie O’Neill once again brings us a light-hearted, fun and imaginative novel about a woman finding her true self.

When Maeve O’Brien totally messes up the friendship between her and her bestie, she ends up moving back home to her mother. This mother/daughter relationship has always been tenuous at best so, it is with relief that Maeve accepts a task from her boss – go to the island of Hy Brasil to get a signature from a chap by the name of Sean Fitzpatrick. It won’t take long, a few days at the most!

Shucking off her busy city life for this claustrophobic little town proves to be easier said than done when it becomes apparent that Sean is a (little) elusive, the townsfolk are more than just a bit strange and then there are those awfully chilling wails emanating from a mysterious source and which almost always precede a death!

Thankfully it's not too much of a lonely journey and, as she continues her pursuit of Fitzpatrick, she makes some friends and also meets the gorgeous Killian - although she misses Dublin, her friends and her maxed-out credit cards, she (very) slowly begins to look at life from a different perspective, even if she is trying to uncover the many skeletons hiding in this town's closet!

I don’t know what it is, but I have always been attracted to the Irish, from their accent (yes Ellie, you could read to me every night and I’d never get sick of it) right through to their mystical folklore. This is only Ellie’s second novel but already she can be counted on for bewitching us with stories about old Irish lore featuring whimsical characters and an enchanting storyline that, like magic, pulls you right in.

It did take a bit for Maeve to grow on me because at first she came across as a bit superficial and up herself but this could possible be one of the greatest character developments I have read before because by the end I hardly recognised her myself. By the end of the novel, Maeve had begun to see the error of her ways, accepted that her mother was also a person with feelings, finally noticed the beauty in the world surrounding her and discovered that there definitely are things in life worth fighting for, thus letting go of all the artificiality in which she had become so enwrapped.

Ellie’s engaging style will keep you turning the pages while her warmth and wit illuminate every chapter as she weaves a rich tapestry of Irish folklore, myths, the people and their beliefs and traditions into a story where everything else pales into insignificance as her protagonist starts to see what is necessary and important. While there is some romance, Ellie keeps this light so that it doesn’t detract from the significance of Maeve’s journey.

Steeped in mysticism and legend, this is a fun, Irishly (is that even a word?) magical read that will sweep you away as you fall under Ellie’s spell.

For some added interest, why not listen to the lilting resonances of Enya or some modern goth sounds by the Eighties band, Shakespears Sister!

I wish to thank the publishers, Simon & Schuster, for inviting me to take part in this Blog Tour and providing me with an ARC hard copy for review.


Ellie O’Neill is the best selling author of Reluctantly Charmed. 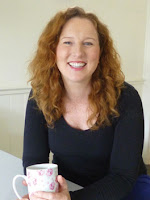 Writing wasn't Ellie's first career, she  sold spider catchers in Sydney, flipped burgers in Dublin and worked in advertising in both Dublin and London. All the while, she had that niggling feeling that she had stories to tell. So, at thirty-something, she made the brave leap and moved back in with her parents to get the job done. Swapping the dizzy disco lights of London for their suburban Dublin house, she scribbled away hoping and praying that there was an ending to the story that had been hatching in her head for a number of years. Her first novel Reluctantly Charmed was born.

Then most unexpectedly Ellie fell madly in love. The only catch, he lived in Australia. True to form she couldn’t ignore the magic and followed her heart to Oz for what was supposed to be a long holiday. Six years later Australia is home to Ellie, her Joe, their fabulous toddler (with an Irish name no one can pronounce) and a newborn. They live in Geelong and Ellie is most thrilled that she recently became an Australian Citizen.

The Enchanted Island is due for release on the 1st November.
Labels: 2015 Book Reviews contemporary fiction