11 Ways to Read a Book Blog Tour - Guest Post: The Psychology of Georgia by Sara Foster

Well, it's finally here - the Blog Tour we've all been waiting for - and I'm delighted to have been chosen to participate in an event that's had everyone talking for some months now.

After a vigorous social media campaign hosted by Simon & Schuster Australia, in which book bloggers were invited to participate in a competition that would determine who would reveal the cover for #AllThatIsLostBetweenUs by Sara Foster, the lovely Monique Mulligan over at Write Note Reviews got it in the bag! Check it out here.

It's a beautiful cover that alludes to the mystery which is slowly unravelled within its pages, giving us a fresh new story about the dangers of social media and the secrets teenagers try and keep - a story that I think a lot of parents of teenagers, like myself, will be able to relate to because it not only opens up to us the world that our young adults inhabit but a world that us, as parents, are constantly trying to navigate in order to guide our children. Sara also touches on other issues in the novel such as a flailing marriage (amongst others) and, as she peels back the layers, we realise that Georgia is not the only one keeping secrets.

Sara has written Georgia’s character so astutely that her readers won't be able to help but feel a close connection to her for the situation she finds herself in and my heart absolutely tore, not only for Georgia but for the miasma that her parents found themselves traversing.

For this reason, when I was advised that I would be kicking off the Blog Tour, I thought that, instead of writing the usual book review, I would try something a bit different. Because I had connected so wholly with Georgia, I found myself trying to figure her out and asked Sara to write a piece on what makes her tick. Of course, Sara's come up with a brilliant depiction but before I get to that, it would be remiss of me not to introduce her first.

Before I leave you to enjoy the rest of this post though, I'd like to ask that you take the time to visit the rest of the bloggers who are taking part in the Tour. To make your blog hopping easier, here's a list that's kindly been put together by Simon & Schuster: 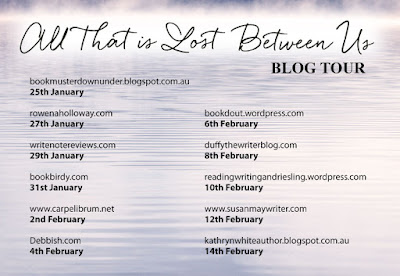 Sara Foster was born and raised in England but she's always had family connections to Australia and they visited the East Coast a few times during her childhood. Her introduction to Australian literature was reading All the Rivers Run by Nancy Cato. After that, she wanted to be Delie Gordon for quite a while and, in 1999 made sure that she stood next to the wheel of the Philadelphia paddle steamer when they visited the Murray River region.

Her first pop concert at age 12 was a Stock Aitken and Waterman event featuring her first love, Jason Donovan. She was on a high for weeks afterwards but little did she know that twenty years later, she would end up editing his autobiography.

Before Sara was a writer, she worked as a book editor, at first in-house at HarperCollins UK and then freelance. She has edited and proofread well over 100 books, fiction and non-fiction, including novels by Paullina Simons, Kathryn Fox and Liane Moriarty. She was also one of the original editors of the Kids' Night in Book series, which has been raising money for War Child since 2003.

Sara is a huge fan of dystopian fiction and is currently studying the genre for her PhD at Curtin University.

She also loves marine animals and, in the past (before children!), she's been a keen scuba diver. She's played with baby sea lions, penguins and marine iguanas in the Galapagos, scuba dived with Galapagos reef sharks and hammerhead sharks, glided with manta rays in Coral Bay (WA) and the Similan Islands in Thailand, encountered huge potato cod and graceful mink whales on the Great Barrier Reef and swum with the mighty whale sharks of Ningaloo. She has experienced the absolute joy of being surrounded by wild dolphins in New Zealand and WA waters and had a very special experience of a dolphin "buzzing" her while she was pregnant (using concentrated echolocation to 'see' the baby).

In 2011, Sara went to Japan while researching Shallow Breath (my review here) and visited Taiji, the town famous for its horrific dolphin drives. She was only there for two days and didn't have to witness the brutal hunt up close, although she watched the banger boats drive the dolphins in from a distance. She did, however, encounter the dolphins in captivity in the sea pens, being broken and starved while trained for human entertainment. They are images that will stay with her forever.

She is also the author of Come Back to Me, Beneath the Shadows and Shallow Breath.

Sara lives in Perth, Western Australia, with her husband and two young daughters.


Meet Georgia. In many ways she’s like most teenagers: studying, partying with friends, figuring out where she wants to go to uni, trying to stop her parents from interfering in her life.

However, since the summer, Georgia has been keeping a secret. She desperately wants to feel part of her peer group, but instead she is becoming increasingly isolated. She can’t tell anyone what has happened to her, not even Sophia, her cousin and her best friend. And especially not her mother, Anya, whose maternal instincts, nevertheless, are on full alert.

At seventeen, Georgia’s life is full of new experiences and relationships. It’s also a time of trying to find her place in life. She’s looking carefully at who she wants to be, and addressing her fears about how to negotiate the wider world.

For today’s teenagers, the world doesn’t stop at their doorstep, it comes right into their lives 24/7, via their phones, their TVs, their computers. They are bombarded just when their burgeoning self-identity is at its most vulnerable.

Georgia is battling all this, and yet she is also busy asserting her own identity and passions. She loves running – particularly fell-running, an endurance race where competitors take on the arduous terrains of the Lake District. And she’s also figuring out if Danny might really be the boy for her.

Georgia isn’t easily explained. She is the amalgam of her joys, her longings and her fears, plus everything she has imbibed from society, her parents, her peers. That’s why she was such an absorbing character to write.

Seventeen-year-old Georgia has a secret – one that is isolating her from everyone she loves. She is desperate to tell her best friend, but Sophia is ignoring her, and she doesn’t know why. And before she can find out, Sophia is left fighting for her life after a hit and run, with Georgia a traumatised witness.


As a school psychologist, Georgia’s mother Anya should be used to dealing with scared adolescents. However, it’s very different when the girl who needs help is your own child. Meanwhile, Georgia’s father is wracked with a guilt he can’t share; and when Zac, Georgia’s younger brother, stumbles on an unlikely truth, the family relationships really begin to unravel.

Georgia’s secret is about to go viral. And yet, it will be the stranger heading for the family home who will leave her running through the countryside into terrible danger. Can the Turner family rise above the lies they have told to betray or protect one another, in order to fight for what matters most of all?

Set against the stark, rugged beauty of England’s Lake District, All That is Lost Between Us is a timeless thriller with a modern twist.


All That Is Lost Between Us will be on sale at all good bookshops from the 1st February 2016
Labels: Blog Tour