Sasha was born and raised in Perth, Western Australia, has completed a PhD in cultural theory and loves nature, Jane Austen and puns. 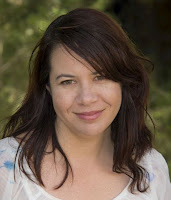 She's been composing literary works since before she could write and also pens mystery, paranormal and young adult novels as S.D. Wasley.

A farming wannabe with a passion for animals and the land, she lives in the Swan Valley wine region with her partner, two daughters, dogs, cats and chickens and, although she's in her forties now, she still wants a pony.

Sasha, thank you so much for contributing this post and an even bigger thank you for inviting me to take part in your blog tour.


Thank you, Marcia, for inviting me to do a guest post on your beautiful blog!

Marcia provided me with a list of possible topics to write about and I leapt on this one! I love to revisit my old writings and think about the journey to becoming an author, so this is a great opportunity to do just that.

My first written work was a poem. I was about five years old and I announced it spoken-word style to my mum, like a tiny, scruffy-haired beatnik (cue clicking):


Days go slow when you’re little, you know.
At school, a day takes a year to go.
But when I’m at home, the days go so fast,
That I wish that a day would last and last.


My mum, still my biggest supporter, wrote the poem down for me and kept it.

At that stage in my life, I hadn’t thought of being an author. I had a range of other career aspirations, including checkout attendant (that seemed so incredibly glamorous to me back then!), hairdresser, teacher, nurse and, I’m informed, once even announced I wanted to be a stripper. I have been a checkout attendant and a teacher, but never a nurse or hairdresser, and stripper is still on the to-do list as well. (Kidding!)

It wasn’t until my teen years that I first aspired to become a writer. By then, I’d written a load of creative works, from ‘radio’ plays (i.e. cassette recorded), to poetry and short stories, musicals, diaries, observational notes and stream of consciousness, and even club membership booklets and nature field journals. Let’s just say writing was a huge part of my life – especially creative writing.

I also read a lot. My big sister was my library. She reads faster than anyone I know and knew all the best places to buy, borrow and beg books (and maybe even steal – I’m pretty sure she still has one or two non-returned library books). All I had to do was wait a maximum of two days when she brought home a new book and then it would be mine to read. MINE!

I started writing my first novel at 14. I still have it! It’s not great. It’s an extremely derivative historical children’s fiction story based closely on the likes of Anne of Green Gables and Norah of Billabong. I also dabbled in some Sweet Valley High-esque teen romance. Then I got into John Irving and started writing stories a bit like his (but much worse). Then I tried my hand at a bit of Elizabeth Jolley. The point is, everything I wrote during my teen years was a regurgitation of my favourite authors – but I had no idea I was doing it until years later.

I continued this pattern of writing like my favourite writers into my twenties and thirties. It came to a head when I read Harry Potter and then wrote a middle grade fantasy novel that accidentally reproduced plot points and actual place names from the series! I sent it off to publishers and Scholastic asked for a rewrite/resubmit – which got me tremendously excited. Then they rejected it on the grounds that it was too much like Harry Potter. At first, I inwardly disputed the thought that it could be similar to HP. It was completely different! The main character was a girl! And the school was not a magic school, it was a normal school! But then my eldest daughter grew old enough for me to read HP to her as a bedtime story and I realised that I had inadvertently copied whole themes, scenes and concepts from Rowling’s beautifully original books into my well-written but terribly unoriginal book.

I pretty much gave up writing for a while at that point. Not altogether – my day job was writing, too. I was a copywriter who provided text for websites, brochures and presentations, so words were still my world. But I felt like I’d given the publishing world a go and gotten nowhere.

Then I had significant upheaval in my personal world: a divorce. I found myself pouring some of the excess emotion into angst-ridden Twilight-esque young adult fiction. I sent a manuscript off to several publishers and got vague nibbles in response, but those rejections kept happening. My dream of being an author was fading. I was approaching forty and still unpublished. What the hell? I wanted to be one of those brilliant young authors who get picked up and thrust into fame and fortune at twenty or twenty-five years of age. Hell, I’d even settle for twenty-nine! But almost forty? I was practically decrepit.

Forty hit. Huh. I was still here, still felt the same (i.e. not old), still writing. Then it happened. A bite.

A small Canadian outfit called Evernight Teen wanted to publish my teen paranormal. I jumped at the contract and enjoyed the wonderful ride to the publication of my first novel, The Seventh. It was 2014. Once that book was out, it was like my soul ran out of patience with playing at other jobs. I wanted to be an author and I wanted it NOW. I didn’t want to write another website or brochure ever again. I was an author, and I wanted it to be my full time, forever day job – instantly!

I worked my arse off for two years, writing as hard and fast as I could. Did my books start flying off the shelves? No way. But what did happen was: I improved. I wrote so hard, so many words, that I got better much quicker than I ever had before. I’m still a long way from where I want to be, but I’m writing better than I ever have in the past, and that’s something.

I’m an author – but I still want to be an author when I grow up.

They were best friends who were never meant to fall in love – but for one of them, it was already way too late.

Willow ‘Banjo’ Paterson and Tom Forrest were raised on neighbouring cattle stations in the heart of the Kimberley. As young adults, sharing the same life dreams, something came between them that Willow cannot forget. Now ten years have passed since she's even spoken to Tom.

When her father falls ill, Willow is called home to take over the running of the family property, Paterson Downs. Her vision for a sustainable, organic cattle station is proving hard to achieve. She needs Tom’s help, but is it too late, and all too complicated, to make amends?

Tom’s heartfelt, decade-old letters remain unopened and unmentioned between them, and Willow must find the courage to finally read them. Their tattered pages reveal a love story like no other – and one you’ll never forget.