“The Husband's Secret is a funny, heartbreaking novel of marriage, grief, love and secrets. When her husband announces he's in love with her best friend, painfully shy Tess picks up her young son and returns to her mother's house. There she begins an unexpected affair with an old flame. Rachel is a woman in her sixties consumed by grief and anger at the loss of her daughter twenty years earlier. When her son announces he is taking her beloved grandson overseas, Rachel begins a descent into deeper bitterness and pain. Cecilia is the quintessential "I don't know how she does it" woman. A devoted mother to three daughters, she runs her household like clockwork, is President of the P&C, owns an extremely successful Tupperware business and is happy in her fifteen-year marriage. Until she discovers a letter in their attic labelled:

‘To my wife Cecilia, to be opened in the event of my death’

With one swift, vicious movement, she sliced the envelope open, and pulled out a handwritten letter.

love you and the girls...
so sorry to leave you with this...
cannot bear
Her husband's secret is a bombshell beyond all imagining with repercussions across the lives of all three women.”

“None of us ever know all the possible courses our lives could have, and maybe should have, taken. It’s probably just as well. Some secrets are meant to stay secret forever. Just ask Pandora.”

Imagine discovering a secret so dark that it threatens not only your carefully built life, but your sanity too!

I thought the timing of me reading this novel was quite apt in that the story takes place over an Easter weekend and I had the pleasure of actually reading it during the week leading up to Easter and finishing it off over a very relaxing Easter weekend.

What would you do if your partner announced he was in love with your best friend? Tess finds herself in this situation after her husband and best friend sit her down and announce that they are in love with one another. Absolutely heartbroken and trying to re-assess her life and the hurt these two important people have just inflicted on her, she decides to remove her son from the inevitable conflict and tension by taking him to Sydney to spend time with her mother who is recuperating with a broken ankle. Deciding that it would perhaps be best to remove themselves from the situation permanently, she enrols him in the school where she went as a young girl and tries to get her life back on track. Only problem is, a former love interest has reappeared amidst her soul-searching! What will she do?

What would you do if your child was taken from you and you never knew why? Rachel has never quite come to terms with the death of Janie twenty years before. After all, she was murdered, and with no evidence at the crime scene and DNA testing not yet available, no formal charges were ever made. But she has her suspicions, and as the eve of the anniversary of her daughter’s death approaches and she learns that her son and his wife will be taking her two-year-old grandson with them to live in the United States, she descends into a state of melancholy and grief and a case of mistaken identity along with irrational thoughts of revenge lead her to make a split-second decision with devastating consequences and which quite pertinently takes place on Good Friday. What will she do?

What would you do if you discovered your husband had a secret so dark it could destroy your family? Let’s face it, we’ve all had those days when, as busy mothers and wives (a lot of whom also hold down full-time jobs), we feel like we are just existing, wishing that something different would happen … So, when cool, calm, collected and extremely organised Tupperware consultant, Cecilia Fitzpatrick, finds herself living that life rutted with seeming ordinariness, she certainly doesn’t expect the Berlin Wall to be a catalyst for the events which take place during the week leading up to Easter Sunday!

In the attic, on a quest for one of her daughters, she accidentally topples a pile of boxes and discovers a sealed envelope with the words “To my wife Cecilia, to be opened in the event of my death”. With John-Paul away on a business trip, she tries to put thoughts of the letter out of her mind, rationalising that it couldn’t be all that important if it was tucked away with old paperwork and attempts to give him the benefit of the doubt. However, when he telephones that evening, curiosity gets the better of her and when she asks him about it she is met with … silence. Attempting to go about her life as normal, but with ‘Jerry Springer’ moments running riot through her head as she thinks back on John-Paul’s uncharacteristic behaviour of the past few months as well as a conversation which takes place between two of her daughters, Cecilia thrusts the reader into a tumultuous journey of possibilities and, as we try to make sense of it all in our own minds, when the truth is finally revealed, we are blown away … her perfect marriage to the perfect husband is not so perfect after all and her perfectly well-ordered, mundane life threatens to tumble down around her. Be careful what you wish for!

When I received this book for review, I was quite intrigued by the premise and inspiration which I thought to be quite original and immediately called to mind one of my favourite authors, Jodi Picoult. Not having had the pleasure of reading a Liane Moriarty novel before, I didn’t know what to expect and, to be honest, had some difficulty getting into the novel, possibly due to her writing style. I am pleased to say that I persevered and have found yet another Aussie author who surreptitiously pulled me in, enthralling me with her solid characters and involving me so deeply in their lives that I found it hard not to keep the pages turning and, while the first half of the book had me wondering how these three characters’ lives would intersect, once the scenario had established itself, I was left with some questions of my own, wondering if Cecilia’s ingrained morals would win the day, whether Tess would be able to find it in herself to forgive both her husband and best friend and, if Rachel would finally overcome her deep-seated bitterness, anger and pain thereby allowing her to experience forgiveness.

Well-written, perfectly structured and told from the perspective of all three women, the narratives collide with thought-provoking issues, realistic characters and complex moral choices with the resolution coming to pass on Easter Sunday, ultimately leading you to an epilogue with some stunning disclosures that will leave you pondering not only your moral beliefs, but the universal principle and power of fate!

I wish to thank the publisher, Pan MacMillan and The Reading Room for providing me with an ARC of this novel.

Liane Moriarty is the author of Three Wishes, The Last Anniversary, What Alice Forgot and The Hypnotist's Love Story.  All of her novels have been published successfully around the world and translated into seven languages. Writing as L.M. Moriarty, she is also the author of the Space Brigade series for children. Liane lives in with her husband, son and daughter.

Yet another addition to my list for the Australian Women Writers' Challenge 2013. 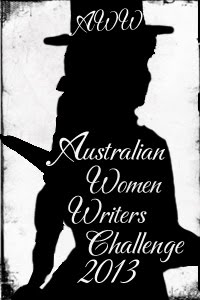