"Cass Lehman has a terrifying ‘gift’... She sees what others can’t...

The youngest in a family of extraordinary women with supernatural talents, Cass is cursed with the not-so-sexy gift of seeing the past... but not just any past; she sees death.

Fo years she's hidden herself away in her family home. Now desperate for a better life, she ventures into sleepy Jewel Bay, only to stumble upon murder and mayhem and a killer at large who's been lurking in their midst...

Taking a chance, Cass volunteers to assist Detective Ed Dyson with the investigation. Will Cass be able to save the latest victim... and herself?

Hindsight is the first in a crime thriller series featuring Cass Lehman and Detective Ed Dyson."

The first in a crime series featuring Cass Leham and Detective Ed Dyson, Hindsight introduces us to these two polar opposites.

Twenty-eight year old Cass Lehman is and has been in self-imposed exile at her family home in Adelaide for the majority of her adult life, due to her gift of “retrocognition” which allows her to experience the last moments before death of a victim if she stands on the spot where that person died – not something that any of us would like to experience, I’m sure!

As she's getting older, she's realised that her gift is making her feel shackled, resenting the fact that she has no life, no future prospects and worrying that she will grow old with only her mother and grandmother for company. Although her mother and grandmother have assisted her in mapping out the areas in their town where she is safe, she constantly longs to be a normal contributing member of society (with a life) without having to worry about going into unknown territory in case she steps on a spot which will have her somewhat paralysing gift rise up and leave her weakened.

When the police find a woman’s body in a crate and Cass reads about the case, she decides that this might be the step she needs to take to reclaim her life and approaches the lead detective, Ed Dyson to offer her assistance.

Ed is an extremely troubled detective. Two years before, his wife Susan who was pregnant with their unborn child, disappeared never to be seen again. The only person who seems able to keep him on the straight and narrow is his partner, Phil. When he’s approached by Cass and learns that she is a psychic, he’s skeptical to say the least (and I won't mention his partner's reaction) but, when their only witness is found dead before he can corroborate with the police, Ed decides that perhaps he should give Cass a chance.

It’s only later when Cass discovers the link between all the missing women that Ed and Phil have been missing in their after-hours investigation that he realises they have a serial killer on their hands and it becomes a race against time as they try to catch the killer before they strike again.

When Cass finds herself in the clutches of this methodical sadist, Ed is put on the clock to find her before the unthinkable happens.

I love a good crime thriller but give me one that features a psychic and I'm hooked.The reason for this is that my own mother has psychic tendencies so the subject has always fascinated me. In saying that, I didn't feel that Melanie Casey took this subject-matter over the top and Cass’ gift is portrayed very subtly, never taking over the narrative.

For those who feel they wouldn't enjoy a touch of the paranormal, I can sincerely say that Melanie enhances the story to give her readers a fabulous crime novel with a twisted serial killer at its heart and her writing drew me into the world of Cass and Ed who are well-rounded and relatable characters with whom I felt an immediate connection.

Cass is a beautiful person, loving, caring, but struggling to come to terms with a future that may not be hers for the taking. Her personality shines right through the narrative while her visions, which can be horrendous and take it out of her completely, will have the reader advancing in the story with some truly bone-chilling moments.

Ed is a tortured soul. Struggling to come to terms with the disappearance of his wife and unborn child, he’s just about at the end of his tether and doesn’t need some meddling psychic to come into the mix. His hurt and anguish is portrayed very well in his attempt to discover what happened and I couldn’t help but think about other real-life cases that have featured in the media and the families of those victims who have never been able to get the closure they need.

Melanie offers up only bits and pieces of information about the serial killer right through, thereby cranking up the tension and I found myself turning the pages trying to discover who this killer was. The narrative continued to proceed at a gripping pace, culminating in a spine-tingling climax where I found myself rooting for both her hero and heroine in their race against time

This debut is testament to Melanie’s talent as a writer and I can’t wait to see what she has in store for us in the next instalment featuring Cass and Ed, Craven, which was released in June 2014.

If you’re looking for a crime thriller with a gutsy heroine, a tortured hero, grit, intensity, a hint of more to come and just a sprinkling of a believable extra-sensory gift, then I wouldn’t hesitate to recommend this novel which is a promising start to a great new series.

I wish to thank Pantera Press for providing me with a hard copy of this novel.

Melanie Casey was born and lives in South Australia with her two young children and her husband (who didn’t know he was marrying a writer when he walked down the aisle). 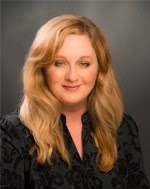 After studying English Literature and Classical Studies, Melanie shifted to Law, and now works in government.

A chance meeting with a high school English teacher in the supermarket made Melanie realise that she should be doing what she’d always loved, writing! Another period of study, this time at the Professional Writing School of Adelaide’s College of the Arts ensued, helping Melanie acquire the skills she needed to put her plan into action.

Hindsight is her debut novel, the first in a crime series featuring Cass Lehman and Detective Ed Dyson.